Two-time Academy Award-nominated director and producer David Bradbury is a documentary legend whose films have taken us around the planet and deep into the heart of individuals with extraordinary stories about war, uprising, injustice and exploitation.

David is the sole creative force behind ground-breaking documentaries such as “Frontline” about war cinematographer and correspondent Neil Davis who covered the Vietnam war for 11 years, “A Hard Rain” and “Blowin’ in the Wind”, both exploring the impact of ‘depleted’ uranium in the Gulf war. And his most recent film, “ The Crater”, about Vietnam War conscript Brian Cleaver’s redemptive journey to locate the missing bodies of 42 enemy soldiers Cleaver’s company killed in one night during the war.

David always operates as a one-man band shooting his own footage and collecting sound as he goes. He has traveled everywhere in search of Story, starting in 1974 as a journalist covering the Spring Revolution in Portugal and the overthrow of the Greek military junta in Athens. He was in Iran for the final days of the Shah. His ferocious need to be at the “frontline” of the action has led him onto numerous actual battlefields including Nicaragua at the time of the CIA-Contra war, the death squads of El Salvador in the early 1980’s, Iraq and the remote independence struggles in East Timor and West Papua. He was nominated for an Academy award for his film on Pinochet’s Chile, “Chile Hasta Quando?”

David’s films have been broadcast around the world on the BBC, PBS, ZDF (Germany), TF1, France, ABC, SBS and commercial TV networks in Australia. He is the recipient of five Australian Film Institute (AFI) awards and has won countless international festival prizes. In an independent career spanning 40 years, David’s 25 documentaries are remarkable for their unflinching exposure of uncomfortable truths and his ability to get to the raw, authentic core of the people who often risk all to tell their stories to the world. 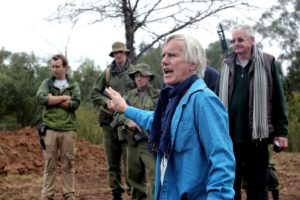