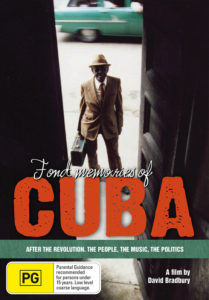 A film that expresses the passionate vitality of the Cuban people and their willingness to embrace life and “get on with it” despite the challenges facing the island nation.

Jim Mitsos is an 86 year old millionaire socialist who has not lost ‘the faith’, despite the collapse of the Soviet Union. He still believes that “the dream of a socialist paradise” lives on in Cuba where Jim has given away substantial portions of his fortune over the years. He commissions filmmaker David Bradbury to return to Cuba to make a film and return with evidence that the dream is still alive, or so Jim thinks, for most Cubans.

As the filmmaker uncovers the reality of dashed socialist dreams laid bare by 40 years of imported grey drabness of Soviet style socialism, he discovers a new generation’s faith in the bright bauble of capitalism which has ‘invaded’ the country as the desperate ‘fix’ that the now isolated Cuban leadership must reluctantly embrace. It is set against a backdrop of fantastic music and undiscovered musicians that the filmmaker encounters on his journey through Cuba.

Bradbury’s quest sets up a moral dilemma for the filmmaker who is here on Jim’s money to bring back a positive story of the Revolution, but can’t help but see the contradictions as Cubans continue to grow quietly frustrated after more than four decades of Fidel in power and one party rule. This sets the stage for an interesting undercurrent and growing call for change that the filmmaker has documented in this road movie film that he shot during three and a half months criss crossing the country.