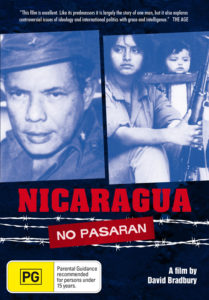 In 1979 the revolutionary Sandinista movement came to government after 43 years of organised resistance and the death of 50,000 Nicaraguans.

They inherited a country bankrupt and with a foreign debt of US$1.5 billion. Through the central figure of leading Sandinista Tomas Borge, David Bradbury examines the past, present and future of this small Central American nation whose methods of survival continue to challenge the US military machine and, through liberation theology, the Catholic Church.

Australian filmmaker, David Bradbury, spent six months in Nicaragua. What he experienced there, and captured on film, was the human face of a troubled revolution.

For years Nicaragua suffered under the brutal dictatorship of General Somoza. NICARAGUA: NO PASARAN describes this period of Nicaraguan history simply, and explains the extraordinary events which led to the formation and eventual coming to power of the revolutionary Sandinista movement.

Ronald Reagan, President of the USA, is constantly accusing the Sandinista government of activities that threaten to destabilise the whole of Central America. One by one, the film explores the truth or otherwise of these accusations.

Are the Sandinistas just puppets who dance to the tune of Moscow and Cuba? Why was the Pope shouted down by tens of thousands of angry Nicaraguans at his mass rally in Managua in 1983? Is this to be another Vietnam?

As with his previous films, Bradbury has concentrated on a central character to best illustrate the story of Nicaragua. It is Tomas Borge, Minister of the Interior in the nine-man National Directorate – the collective leadership that governs Nicaragua.

Borge is the only surviving founder of the original Sandinista movement. He lived the life of a political fugitive, always on the run, for 19 years. His wife was raped, tortured and murdered by Somoza’s National Guard. He himself was tortured and spent six years in gaol.

Now as Minister of the Interior, in charge of police and State security, he is at the centre of Nicaragua’s fight for survival against the US-backed contras who are attempting to overthrow the Sandinista government.

It is through Borge’s charismatic personality that the history and spirit of this most unusual revolution are given voice: NICARAGUA: NO PASARAN: – Nicaragua: they will not enter.