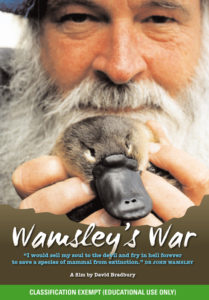 The documentary follows Dr John Wamsley’s attempt to acquire a parcel of land in the Grose Valley NSW for use as a wildlife sanctuary.

A wealthy man in his sixties with a PhD in mathematics, Wamsley is taking on the conservation establishment.

Underneath his famous feral cat hat, Dr John Wamsley is a man with a mission: to become Australia’s biggest private landowner and rid the nation of feral animals within the next 25 years.

While many conservation groups struggle to raise $100 at a corner cake-store, Wamsley has found a way to save Australila’s endangered wildlife and pay for it on the Stock Exchange. His faith in the private sector has delivered to him many millions of dollars to buy up large tracts of land, getting him closer to his goal of fencing off one per cent of Australia to create wildlife sanctuaries right across the country. He is a very controversial character. His ambition has made him many enemies in the conservation movement.

Wamsley’s War documents John’s attempt to get a sanctuary up and running in the Blue Mountains in time to cash in on the expected half a million visitors for the 2000 Sydney Olympics.

When Wamsley found the old disused Canyon coalmine new Bell, 100kms west of Sydney, he thought he was on a winner. Only 50 acres of the 900 hectare site had been used for mining, the rest was in pristine condition and overlooked a National Park with multi-million dollar views up the majestic Gross Valley.

The only catch? Canyon colliery was earmarked to be returned to the surrounding National Park and many locals thought that is what should happen. Thus the stage was set for Wamsley’s War.