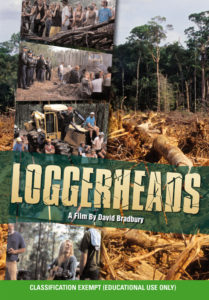 Finished in 1997, a gutsy cinema verite look at the battle in the frontlines of the forests of northern NSW between the loggers and so-called ‘feral’ environmentalists.

A very personal film because it started when Bradbury woke up to find the serenity and peace he sought, living on the edge of a rainforest in northern NSW with his family, shattered by the sound of chainsaws and the thunder of logging trucks on the narrow winding road that went past his door. It catapulted him into action to make this film which at times saw him confronted by angry loggers who wanted to smash his camera.

David Bradbury places himself in the midst of the battle to save the sub-tropical forests of northern NSW. He seeks a solution between those who long for the glory of a lost past and those who fear the loss of a splendid future.

Bill Mollison, the Father of permaculture and former logger, urges governments to get rid of the multinationals and woodchippers and open up our forests to spot millers, to the small bloke who lives in the community on the edge of the forest where he can earn a living. There can be a sustainablue future for the logging industry while enhancing all the values of our vast and splendid forests.