The Battle For Byron 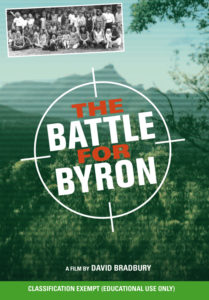 Bradbury produced, filmed and co-directed with Richard Mordaunt was about the Byron Shire community coming together to halt inappropriate development.

It tracked the struggle over four years of the community to stop developers, including Club Med, making Byron shire into another Gold Coast.

This film tells the story of how an impassioned community committed to free speech and sustainable co-existence with the natural environment overthrew a council hell-bent on development at any cost.

Byron Bay, mainland Australia’s most easterly point, has a long standing international reputation for being a special place; a haven of beauty and cultural diversity in a world of ever expanding urban monoculture and vanishing natural spaces. The demands of “Brick veneer expansion” at the hands of land hungry developers have overtaken most of the east coast of Australia and are knocking down Byron’s door.

But the battle is far from over…