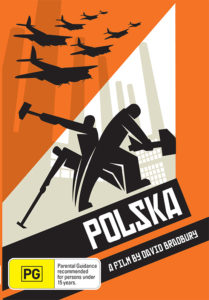 Polska is the personal journey of 28 year old Polish journalist Beata Ligmann as she traces her country’s experience from the concentration camps of Auswitz and World War II to the fall of the Berlin Wall.

Filmed in Poland in 1990 on the eve of the break-up of the Soviet Union, Bradbury retraces Beata’s experience from her student protest days in Gdansk to the present as she watches Soviet troops pack up and turn to an uncertain future in their Russian homeland.

Polska anticipates what is to become of Poles in a globalised free market economy once the welfare guarantees of the socialist state have been swept away and the capitalist carpetbaggers of the West prepare to take over form where the Soviets left off stripping Poland of its health. The film includes archival footage from the Solidarity protest days of Lech Wales.

Despite her country facing a foreboding future, Beata’s grace and charm uplifts the human spirit as she questions herself and her fellow Poles about the uncertain road ahead and what lessons might be learnt from their past squeezed in between an expansionist Germany and Russia.