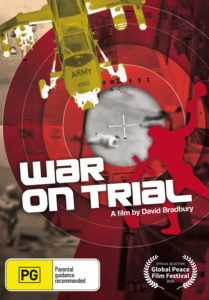 The mattock smote the side of the Tiger attack helicopter. Thud!

After pedalling across the airport tarmac on a red tricycle, Bryan Law in his signature ten gallon hat and business suit had executed his mission. Seconds later, he was surrounded by military troops and security guards.

This was not the action of a crazed man, but of an educated, middle-aged teacher. Since the eighties there have been scores of disarmament actions in the Ploughshare tradition:  In the words of the Old Testament prophets Isaiah and Micah, we are called to be peacemakers to … beat swords into ploughshares and spears into pruninghooks.

The Rocky Tiger Ploughshares action had been planned and announced in the Rockhampton Bulletin, but its execution still took the Australian Army by surprise.

A Tiger Attack helicopter was the focus of this audacious act, following the revelations of the Collateral Murder video showing innocent journalists and children being targeted in Iraq by US military gunners.

A seasoned peace activist, Bryan was well prepared for the trial, but fate intervened and he died on Easter Monday 2013 from a heart attack. However the story did not end there. Graeme Dunstan, a greying Buddhist peace pensioner, had accompanied Bryan to the action and he now faced the charges alone.

The stakes were high. Willful damage carries a penalty of up to ten years in prison. The repair bill was estimated at $162 000.

Encouraged by supporters gathered at Rockhampton for the trial, socially networked friends around the globe and a ‘Mackenzie friend’ in court, Graeme took up the challenge and together they put the government and the helicopter on trial.

The Ploughshares documentary shares this remarkable story of peacemaking in an era of perpetual war in the belief that … Nation will not take up sword against nation, nor will they train for war anymore.